DELQA: Inside the Music of Matthew Dear

Musician Matthew Dear has nothing against traditional, non-electronic instrumentation: he does know his way around a guitar. But, speaking to the Texas electro artist and producer, you might get the impression that this restless sonic and technological explorer could never really be satisfied merely picking at a guitar. “That’s ancient technology,” he says, grinning.

You’re always looking for something else to inspire you and you don’t want to just rest on what you’ve already figured out.

The installation employed an integrated system of lights, speakers (44 of them) and Kinect for Windows technology. It was a collaboration called DELQA: Inside the Music of Matthew Dear, An Interactive Experience.

In a way, the interactivity of DELQA was a logical progression for an artist so adept at generating movement on the dance floor. Even more fundamentally, the project spoke to Dear’s tireless fascination with seeking out the cutting-edge in sounds, processes and experiences. 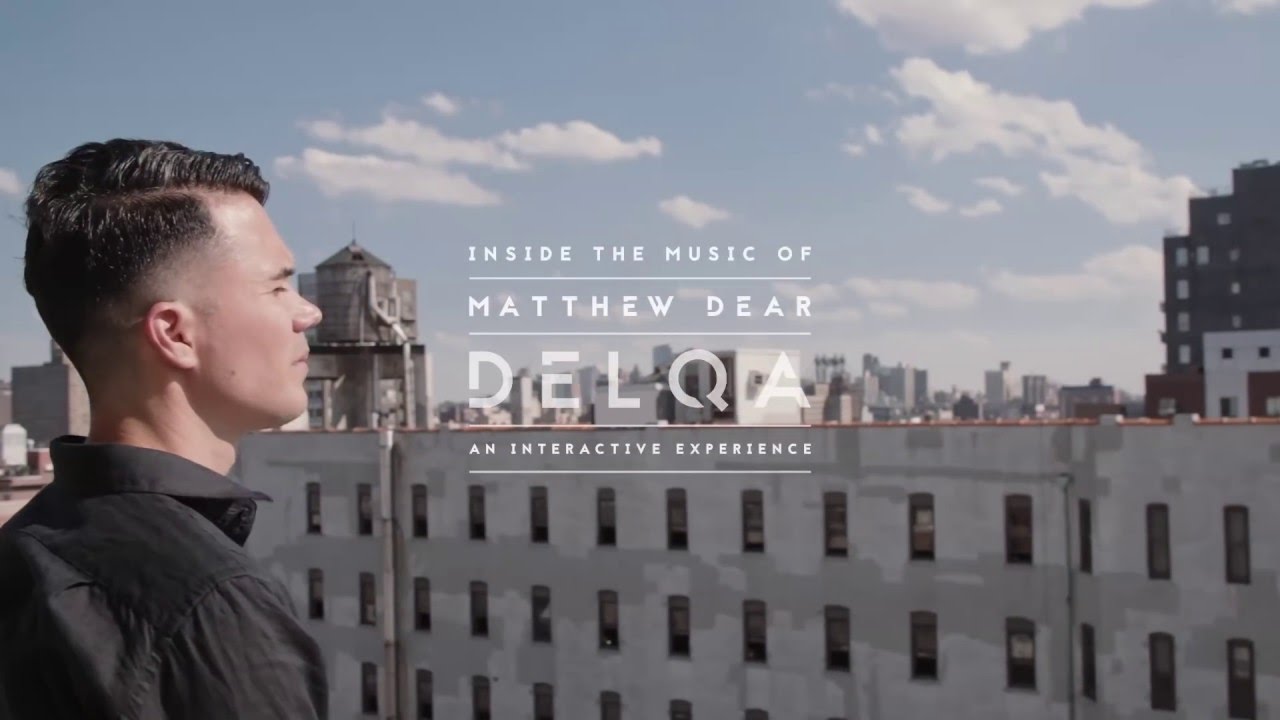 The goal is to bring the audience and the performer as close together as possible. And to make them feel like they’re part of a unified experience.

Over two months, Dear worked with New York agency and creative producers, Listen, and a team of specialists—including a media artist, a music interaction and spatial sound team, and an environmental design team—to build an immersive environment with a continuous soundtrack that responded to the whims of those who passed through it.

Visitors entered and explored a mesh-covered, maze-like space—sometimes climbing, sometimes crawling—where their every movement, as detected by eight Microsoft Kinects, could trigger a seemingly infinite array of musical effects. A wave of the hand might conjure a drum pattern out of thin air; push at the netting and a synth melody might morph and distort before your ears.

Pitchfork described the result as “somewhere between EP and obstacle course;” Village Voice dubbed it “a living piece of music.” For Dear—who personally described the finished product as “Frankenstinian,” in a good way—the whole process of creation was exploratory and satisfying. “There was so much that I learned from the DELQA project. I’d never collaborated with a team of that size and that caliber. Everyone was really excelling in their own field. If you put that many creative people together, you can accomplish so much more than what one person or one group could have done.”

Since making a name for himself in the early 2000s, Dear and his artistic evolution has always been intrinsically tied to the quality of his equipment. “My music changes as computers get faster and smarter and quicker, and as creative people try new things and make new synthesizers or plugins and software. It’s something that goes hand in hand and something that will always be hand in hand for me.”

For Dear personally, Kinect technology in particular presents an opportunity to enhance the relationship between audience and performer, and forge a new kind of live music experience—allowing the listener to manipulate what they’re listening to, as in DELQA. “The goal is to bring the audience and the performer as close together as possible. And to make them feel like they’re part of a unified experience.”

Which is not to exclude the potential for other artists to use Kinect technology differently, and for their own distinct purposes. “You could use the technology to hide the performers as well,” Dear says, “and make it more theatrical.”

Matthew Dear remixes his own sounds within DELQA at the New Museum.
Push at the netting and a synth melody might morph and distort before your ears.
Watch the video to go behind the scenes during the creation of DELQA, and inside the music of Matthew Dear.
Patrons play DELQA during the project launch at the New Museum.
Matthew Dear pushes the limits of his own creation.
Dear worked with a team of specialists—covering music interaction, spatial sound, environmental design, and creative ideation.
An integrated system of lights, 44 speakers, and 8 Kinects brought DELQA to life.

In the end, Dear says, there are infinite possibilities, with the prospects for new and emerging artists particularly promising. “It’s such an affordable piece of equipment that to have one, or two, or even a few wouldn’t break the bank of even your most independent, self-sufficient artist. And if you can have all these different groups of people contributing to different ways of using the technology, you know, the possibilities are limitless.”

Since the DELQA project, Dear has thrown himself into personal recording projects with a new vitality. “Every time you do something new it registers and stores in a little bookshelf in your mind. You have this example of a new way of working. And now that I’ve done that one it gives me a completely different way to do music at home.”

For more technical information about the DELQA installation, explore the toolkit and video tutorial here. You can also read more about the collaboration at the Microsoft News Center.

KEXP and Microsoft gave an exciting, interactive update to KEXP's Live Room with a fresh lighting installation, powered by Kinect.

Washed Out collaborated with Microsoft to produce a dynamic live show, allowing fans to experience in person his “impressionistic view of the world.”

Watch a tutorial video for the open source tool that was developed for the interactive sound installation, DELQA.