With 2.34 billion people across the globe using social media, it would seem the world is more connected than ever. But the sheer quantity of connections has made it harder than ever to form quality, personal ones.

The Tony and Grammy Award-winning musical Dear Evan Hansen—currently on Broadway, with productions in Toronto, London, and cities all across America—explores this contradiction by taking us inside the life of a high school student struggling with isolation, social anxiety, and just generally finding his place in the world. It uses social media as an important character in the story, bringing to life onstage the communities and conversations that unfold online in a way that’s both highly theatrical and heartachingly authentic.

But what resonates isn’t just this authenticity—it’s also the proactive message that empowers the audience to change their mindsets and tackle challenges day by day. There’s a simple refrain throughout the show: “Today is going to be a good day, and here’s why…” It dares you to fill in the blank. And this message of being a force for positive change has inspired fans of all ages to form online communities of their own. Seeing this profound effect, the team behind Dear Evan Hansen teamed up with Microsoft to launch Creating Connections with Dear Evan Hansen, a program that educates and empowers teens to build more meaningful connections in their everyday lives. 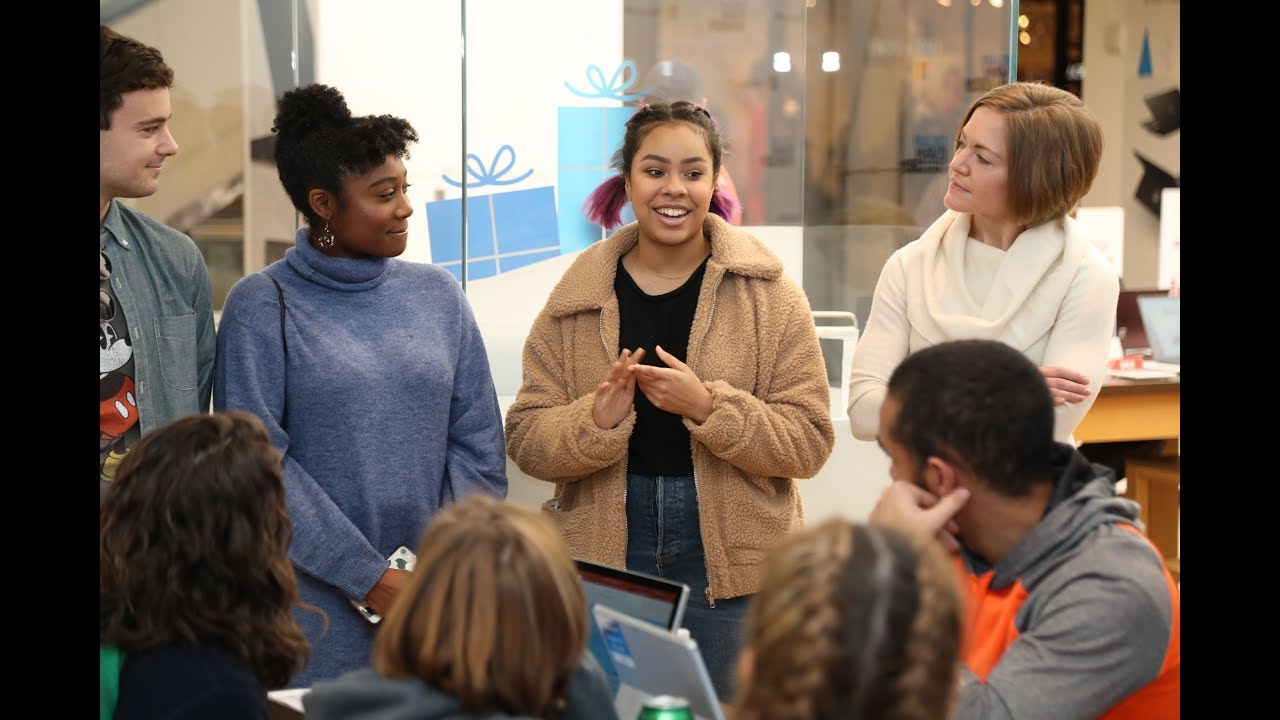 What might seem like an unlikely partnership led to the discovery that both the Microsoft and Dear Evan Hansen teams share a commitment to the same ideal—building better connections. This shaped the focus of Creating Connections with Dear Evan Hansen, which seeks to turn the same technology that can lead to isolation into a force for positive connection. As part of the program, Microsoft Stores across the US are offering a series of free two-hour workshops for students ages 13 and up to help them find their voices and use technology to foster authentic connections with their friends, family, and communities.

Cast member Ciara Harris meets with a student from Redwood Christian School. The workshops help students, ages 13 and up, find their voices and use technology to foster connections with their friends, family, and communities. (Credit: Getty Images for Microsoft Store)

It’s part of a series of workshops, scheduled at Microsoft Stores around the country, that teach students how to make a meaningful difference—in their own lives, and in others’. (Credit: Getty Images for Microsoft Store)

The workshops pose questions that ask students to examine their own experiences and perspectives: Why do you think more and more people today are feeling lonely? When have you yourself felt lonely? What does making a meaningful connection mean to you? What could a world with more meaningful human connections look like?

It’s important to be empathetic and thoughtful in communication because it drives inclusivity and it makes people feel like they are valued.

Given the show’s message that young people have the power to make a meaningful difference—in their own lives, and others’—the workshops will also teach students how to “do good” and influence their communities and schools. Participants will choose a cause that matters most to them: health and wellbeing, environment, or social justice. They’ll then work with a local charity or organization to support that cause, using Microsoft technology create an action plan for fundraising or volunteering.

Make meaningful connections and change in the world. Find a workshop near you to get started or download the study guide to start a conversation in your community or school.

Special Olympics youth leaders around the world are creating connections with one another to promote inclusive communities on a global scale.

Rock band X Ambassadors teamed up with WE Schools and Microsoft to teach high school students about inclusion and accessibility.

Learning from all voices and seeking ways to understand different points of view.