Envisioning the future of sustainable cities

To celebrate Earth Day, virtual reality artists around the world were asked to create their vision for a sustainable city of the future using the Samsung HMD Odyssey on Windows Mixed Reality.
Share

In a world of growing urban populations and intensifying climate change, working towards building a more sustainable tomorrow has become more important than ever.

The promise of mixed reality is to enhance the abilities that make us uniquely human: creative problem solving, collaboration, and ingenuity. A world where computers understand the physical environment and the context within it, pulling information out from behind screens and blending virtual information with our real world.

In honor of Earth Day 2018, Microsoft and MasterpieceVR invited virtual reality artists around the world to create and share their vision for the ideal, environmentally sustainable city of the future.

These artists proved to be true influencers in their field, creating pieces that went much further than “just something to look at,”—they’re something worth thinking about.

Mez’s body of work has centered on code poetry, electronic literature, digital games, and the creation of an incredibly unique digital language, “Mezangelle”, that combines human language and code. Mez’s award-winning projects are taught around the globe, and reside in distinguished institutions like The World Bank, Cornell’s Rose Goldsen Archive, and the National Library of Australia.

With over 15 years of professional experience, Martin has been obsessed with digital artwork since he was handed his first tablet at the age of eleven.

Attending universities all over Russia and France, Anna has spent years studying visual arts, architecture, filmmaking, and sculpture. The world of VR art swept Anna off her feet, awing her with its limitless creative possibilities. She loves that VR allows her to create artwork anywhere in the world without being restricted by the physical size of a workspace. This has allowed her to create massive pieces she would have otherwise been unable to even fathom.

Dealing in a variety of mediums, Scout’s creations focus on character and creative design. Inspired by her previous work in costume construction, clay sculpting, and resin casting, Scout first ventured into the VR realm of digital sculpting at a party in 2017, where a friend let her try out a headset. Scout’s been passionately creating pieces influenced by her fascination with speculative fiction, talking animals, and the surreal ever since.

Artist/illustrator Ian Crighton has been creating and designing things since before he can remember. With a background in both digital and traditional art forms, Crighton has brought his talent to the VR landscape, creating pieces inspired by the macabre and darker side of human nature.

Steve Teeple works across multiple mediums to provide the entertainment industry with expansive 3D worlds inhabited by mind-boggling creatures. His previous work has blurred the relationships between sight and sound to create surreal tableaus aimed at subverting viewers’ preconceived notions of reality.

Australian artist Mez Breeze has fully embraced sustainability when working on her pieces and in daily life, moving away from the glut of new materials that have fueled climate change.

When building a future city that’s environmentally conscious and is based on environmental principles, we’re going to have to deal with our waste and use it in a beneficial sense.

For Mez, the process starts with education, and she sees VR as the perfect medium to create the lasting impact that will push people to change.

“Let’s consider the white rhino population, which is now nearly extinct. If we’d had a VR immersion that showed people everywhere the terrible conditions they were living in—an immersion that promoted the crucial steps we needed to change in terms of ecology, in terms of environment—that might make things change.”’

‘Recyclic’ is a mixture of wind energy generator and public sculpture.
A view of ‘Recyclic’ in world.

Growing up, Martin was obsessed with comic books, Star Wars, and sci-fi. When he first tried VR, he realized it was “the tool that brought him closest to fully actualizing the worlds in his head,” leading him to believe the medium will be used in every industry in the future.

“I’m quite sure in a few years everyone is going to be working like this. I already see a huge movement in the professional field of illustrators—people realizing how cool it is. I’m so glad I was one of the pioneers.”

When building his piece, Martin asked himself what truly makes a city sustainable.

“A lot of people, when talking about sustainable cities, mostly tend to think about solar panels and generators. But to me, sustainability should also be considered on a human level, thinking big picture to make sure there’s enough room for population growth, as well as environmental growth.”

The housing tower he created is fully sustainable, containing “gardens and greeneries where the inhabitants grow their own food.”

The early stages of a concept.
The result of dedication.

Having worked in VR for some time now, Anna has held onto the childlike wonder she felt the very first time she tried a VR headset.

“When I put on the Samsung HMD Odyssey, I was surprised by how sharp the detail was—things rarely look blurry. And when I work in MasterpieceVR, there’s no gravity, so I can float inside my work at will. I don’t need a giant structure to hold my creation, or buy paint and canvas every time I want to create something.”

She dreams of a city where humans can live in “harmony with nature and each other—where there’s minimum consumption and maximum recycling.” She sees VR as the catalyst to “simulate what we will see next” and believes it’s a tool that “we can use to visit and study new places—to be inspired and have new ideas we can share around the world.”

“A sustainable city takes responsibility for the planet and its inhabitants,” says Anna. So, she created a robot that’s “a veritable Swiss army knife of helpful functions.” It flies around the city on its 100% pollutant-free, water-powered flying scooter. People can ask it historical or cultural information, or even get an on-the-spot medical diagnosis.

Having supported food sustainability through a vegan diet for the past 10 years, Scout sees VR as a tool that inherently incorporates sustainability into her artwork.

“I used to work a lot with clay. I’d have materials strewn all over the place and would take up a lot of space,” says Scout. “Now, I just plug in my headset and have access to digital clay that feels a lot like traditional sculpting without any of the mess.”

VR has positioned itself as a medium where artists can create real change through immersion, isolating viewers from the world they know and catapulting them into ones that are yet to be.

The key to inspiring people towards acting to create a more sustainable future is by sharing what it would be like to already be living in one. To take what were just concepts and make them more concrete, as if it’s a place they’ve already visited.

As Scout transports someone into a new world, she employs realism to evoke a sense of empathy from her audience. With MasterpieceVR, Scout has access to VR creative applications allowing her to elevate the realism of her pieces beyond what’s normally possible.

She adds that VR is a tool that inherently incorporates sustainability into her artwork.

As an avid cyclist, reducing carbon emissions has played a significant role in Ian’s life. For him, “VR isn’t just about artistic expression, it’s also about forgoing the need to travel. Once widely available, it will greatly reduce carbon emissions, allowing minds all over the globe to collaborate without having to burn fossil fuels.”

“In my piece, I’m hoping to convey a sort of symbiosis in terms of organic versus inorganic, a reflection of nature intertwined with the manufactured.”

For his piece, Ian sought inspiration from dystopian novels, documentaries, online articles about future sustainable technology, and nature itself.

When designing his electric ground-based vehicle, which stemmed from his carbon-neutral passion, he used “stored solar energy cells and magnetic rimmed wheels to make it a viable alternative to most fossil fuel-powered vehicles.”

Having a landscape artist for a mom, Steve has “always been big on plant life and things like that.” So, it’s no surprise he’d want to be part of creating a fully sustainable city.

Finding “full freedom of mobility” when working with the Samsung HMD Odyssey—a feature integral to the work of VR artists—Steve focused on weather patterns and global climate when designing his combination air purification and advanced weather control satellite.

“This is a self-sustaining device that hovers throughout the city purifying air with its bladeless intake design,” he says. “With an array of tools to measure atmospheric conditions, these satellites can work together to create a network of invaluable data on global climate and help us make changes to better our future.”

“Just like what the internet did for collaboration,” he says, “VR will open doors for sustainability efforts with people all over the world working together in a real interactive environment free from barriers.” 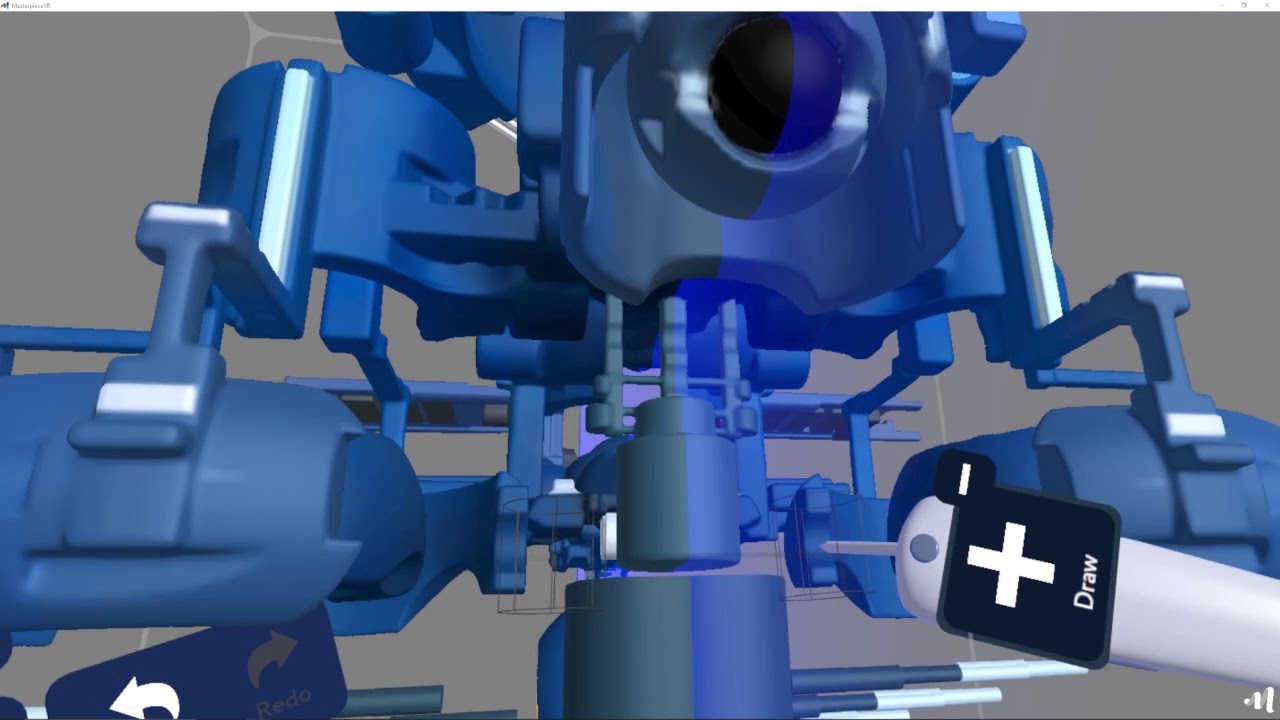 After laying the foundation, Steve focuses on nuanced details, adding realism to his work.

“For me, it’s all about finding shapes and forms that stand out and sell the design. I worry about small details once I know the main shape is established and interesting.”

Microsoft and MasterpieceVR would like to thank our participating artists for using technology to convey their passion and dedication towards building a sustainable vision of the future—only by working together can we create a lasting legacy of change.

More ways to protect our earth

Imagine and create your own sustainable future

Use your Microsoft Rewards to support Earth Day initiatives.

New ways to protect the planet

This Earth Day, learn how to take action and make a difference on a global scale.

Get informed on initiatives and innovative ways to create a more sustainable earth.

Apply for an AI for Earth grant

See how grantees are using AI for Earth research grants to empower their work.